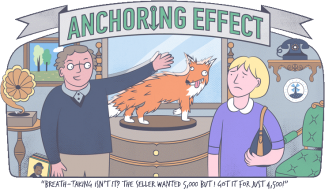 Anchoring Bias: The Costs of Being Weighed Down

Do you think a porcupine has more or less than 1000 quills (i.e. the spikes on its back)?

Since reading that sentence, it’s likely you experienced a harmless example of Anchoring Bias.

Anchoring, by definition, is an impulsive inclination we are all subject to in where we subconsciously attach a greater value to a singular piece of information. From that point, or “anchor”, we base most of our decisions. Whether it’s shopping during a sale or when we expect to retire, it is somewhat difficult to avoid this mental behavior’s grasp on us as we feel our number is the “truer” value.

When investing, one of the more common anchors one experiences is deciding when to sell. Suppose an investor got in at $30 and plans to cash out at $60. It’s a goal one can easily get behind as it is effectively doubling the investment. That $60 anchor now becomes everything. Even if it goes up to $50, the investor would most likely say, “I’m almost there, just $10 more and I’ll sell”. A downturn could occur and the price could go down to $15 and the investor could still hold on to it because $60 is what was established from the beginning.

Allowing yourself to have some mental flexibility and reminding yourself of the big picture can help with keeping this bias under control. Think of the most important piece in a jigsaw puzzle. Typically, one would go for the corner pieces and work from there or arrange them by color when, in fact, the most important piece is the picture on the box.

Ultimately, getting hung up on a small piece of a puzzle can cloud our decision-making and make us lose sight of the big picture which should be our primary anchor.

(A porcupine, on average, has about 30,000 quills. How far off were you from your anchor?)